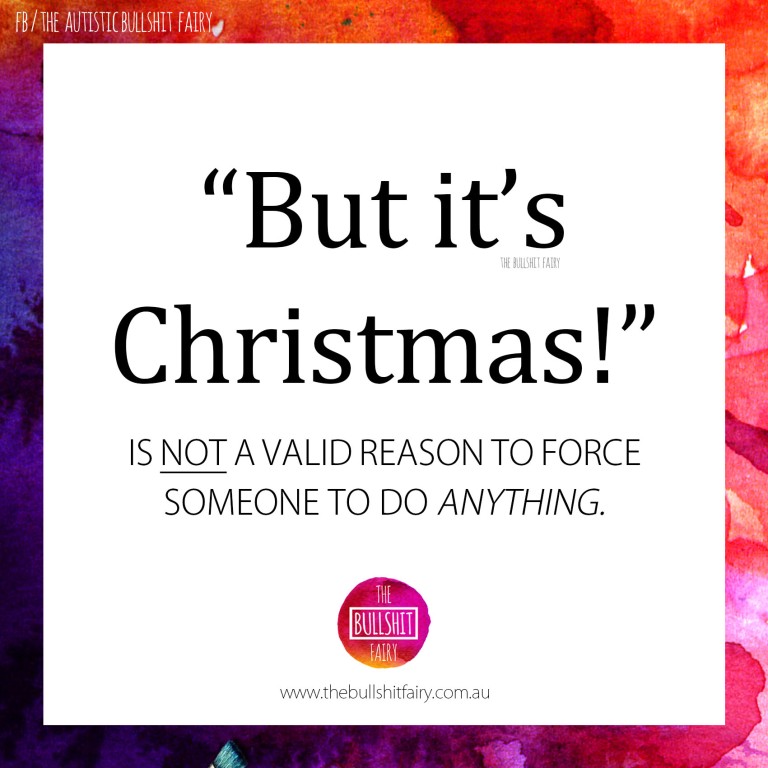 Dear relative/friend of an autistic child/person,

I am writing to you because I see “refusing food” as a problem that causes a lot of distress for many in my community, being pressured to socialise and eat particular foods at Christmas time – and I want to use my platform as The Bullshit Fairy to tell you what I think about this time of year.

For me, cooking IS love. I love creating meals for those special to me and for a long time, I have struggled with this because my autistic children will choose chicken nuggets from the freezer over something that has taken me hours to make. But over time I’ve learnt, their refusal isn’t personal. It’s SENSORY.

If your offering of food is refused by an autistic person – or someone with sensory sensitivities, it can feel insulting.  But an act of love, sharing food that is made with love, isn’t actually about the food at all, is it? It’s about the LOVE.

And love is about respecting other people and their wishes, their needs and their preferences. It doesn’t matter how deeply you love someone, or how delicious the thing you have made is – the main point here is, you are offering someone something – and they have said No.

That might be frustrating for you, but you can’t force someone to give you consent. Because then it’s not consent.

But as an autistic person, I often feel like I don’t have a choice. This is because disabled people, generally aren’t seen as capable individuals, who are able to decide what they want or need. It’s also because my choices don’t make sense to most people, so the other person then gets to decide whether that is a valid argument and if it’s doesn’t, they will ask again or insist I try a little bit, “because it’s Christmas.”

I *should* just be able to say No about whatever touches or goes into my body.

I *should* just be able to give or refuse consent.

As it’s Christmas, let’s use this analogy. Say there’s mistletoe, and some luscious young man has asked for my permission to kiss me and I have said yes. Our lips meet, it’s everything I’ve ever wanted in a kiss, it’s divine.

Now let’s say later on that day, I’m feeling pretty overwhelmed with all the small talk, replaying in my mind, all the awkward things I wish I hadn’t said throughout the day and I pass through the hallway and oh… The same guy again, who now has been drinking all day, meets me under the mistletoe.

But he responds with, “Ohhh come on, it’s only a kiss! It’s Christmas!” and before I have a chance to respond, he has thrust his tongue into my mouth.

I shove him off me and contemplate kicking him in the balls, but he just laughs and says, “Oh but it’s Christmas! Lighten up love!”

Now this might seem like a drastic comparison, comparing sexual harassment to food, but for me, it’s from the same awful cluster of feelings. It’s a violation of my body. It doesn’t matter if we kissed before.

And for some reason, Christmas, a time that is supposed to be about celebrating family and love, is also used as a reason to make people do things they DON’T WANT TO DO.

What the actual fuck?

I actually shouldn’t have to fucking explain anything to you! My refusal should be accepted. It doesn’t need to be understood.  I am under no obligation to make sense to you.

But, because I’m trying to help here, or because I actually do care about someone, I try to explain my WHY.

I also need to highlight an important point, very often, autistic people are UNABLE to provide a nicely packaged verbal response. As I said, they shouldn’t have to, but sometimes they simply can not.

So know this: Forcing me eat your Christmas ham, when I don’t give consent, is like having that man’s unwanted, sloppy tongue in my mouth.

My entire body is shouting NO, but I have to taste your Christmas pig, “Because it’s Christmas” right? What message is that sending the person you love? That my body is mine except on Christmas? That because you deem my reason as not good enough, it doesn’t matter?

“I love you but you have to eat this because I spent ages making it for you?”

What about, “I love you but you have to eat this, even though I know you’re allergic to it?” That wouldn’t happen!

Sensory sensitivities aren’t considered REAL and that’s Bullshit. Just because I’m not going to end up in the emergency room doesn’t give my reason any less validity.

But hasn’t everyone just really felt NOT like eating something and you can’t really give a reason why? Is that feeling any less valid because you can’t form it into words?

(Which is another thing, I often can’t reply with my reason on demand, even though I am mostly speaking).

I once enjoyed an amazing chicken burger with the most delicious homemade mayonnaise at a pub, and a few hours later I experienced the worst gastro of my entire life. My stomach twisted and turned so much, I honestly thought I was going to die. I was living up north of Western Australia at the time and it was a small community, so this horrendous virus made its way all around the town.

Even though my illness wasn’t as a result of the burger, I couldn’t even look at mayonnaise. I  *still* sometimes struggle and that was in 2002!

But for months after, whenever someone asked me why I won’t even try their most special-amazing-spectacular potato salad ever, I’d appropriately refer to my mayonnaise nightmare and they would respond with complete understanding because most of the town still remembered the horror of the gastro outbreak. So it made sense to them.

But now I’ve moved and it’s been over ten years and sometimes I still hesitate to eat food that has mayonnaise and people think I’m being precious, or difficult.

It would make my life so much easier to lie, but that’s just not my style. I don’t believe that if I  say, “No thank you” and my reason is that I am allergic, I am experiencing sensory sensitivities, or I just don’t want, holds any less validity.

You don’t need a reason. My reason is my choice to reveal to you and if someone IS telling you their reason, think about what that is saying about you. Why aren’t you accepting their “No” ?

So this Christmas, please respect everyone’s choices to eat or not eat your food even if it doesn’t make sense to you. Just because someone doesn’t eat your food, doesn’t mean they aren’t appreciative of the work you have done or how long it has taken you to create. Their choice isn’t about you. It’s about them.